Popular posts from this blog

Letters to Robert Bloch and Others 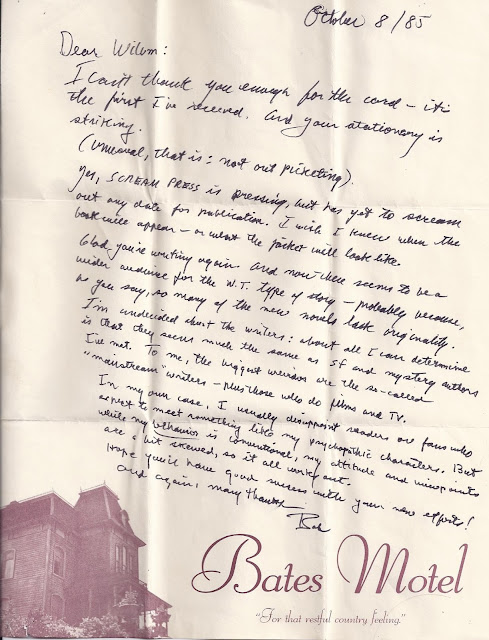 Above is a letter Bob wrote me in 1985. I first began to write to Bloch in 1969, when I asked him to write a wee tribute to Forry Ackerman for my horror film fanzine, Fantasia . I was deeply into horror films at the time and had little interest in reading fiction. When, in 1971, I was stationed in Northern Ireland as a Mormon missionary, I wasn't allowed to attend horror films (they were deemed a bad influence); and so, because I was pen pals with Bob, I began to go to wee used book shops and find anthologies wherein Bloch was one of many writers. That's how I got hooked on reading horror fiction, which became my main addiction over the new few years. I was stationed in Omagh, County Tyrone, when I found a used copy of a book that had but recently been republished in paperback: THE HAUNTER OF THE DARK AND OTHER by H. P. Lovecraft ( Panther Horror, 1970). I knew of Lovecraft because of some films that had been made based on his stories, and because one entire issue of an old
Read more 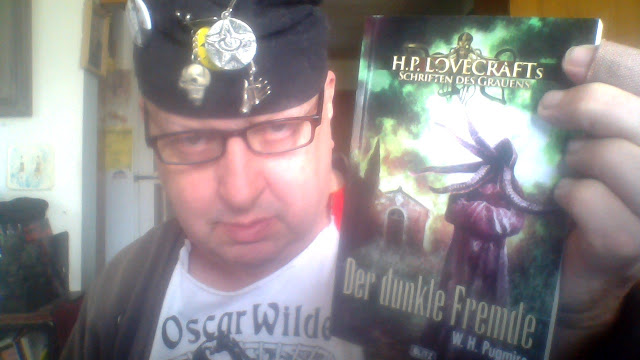 I was told, long ago, that ye original spelling of "Pugmire" was the German word for frog marsh or frog pond. I liked that, although I had no idea if it true; and I began to sign my personal correspondence "Capt. Frogmarsh". So I got a wee thrill to-day when ye postman brought me copies of my newest book, a German collection of my short stories. I love ye cover illustration.  Ye Contents: "Das  Fenster zwischen den Welton" "Das Tal aus Sand und Wind" "Hinter dem Tor der tiefen Traume" "Das Zeichen des Gesichtslosen Gottes" "Der Kuss des Nyarlsthotep" "Die Lauschende Leere" "Die tausend Saulen von Irem" "Der Blick hinter die Welt" That first title is a full-page poem, & ye rest is fiction. The idea of translation interests me: how can a writer with a very distinctive style have her work faithfully translated into another language?  Along with ye book came a journal,
Read more 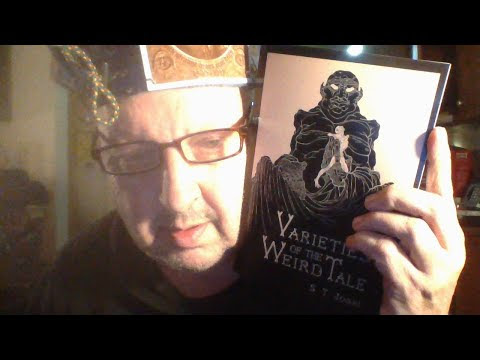 w. h. pugmire, esq.
Active gay Latter-day Saint and full-time writer of Lovecraftian weird fiction. I believe in writing as an art form, and declare that H. P. Lovecraft was a serious artist of genius.